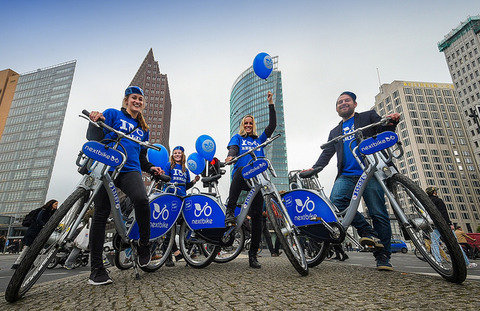 In December 2017 a bike sharing pilot started in Dordrecht. This pilot was carried out by the Province of South Holland, the municipality of Dordrecht, Waterbus, Arriva and nextbike. On 9 December 2018 Qbuzz will take over the public transport concession in Dordrecht from Arriva. After a first pilot year, the pilot with nextbike will be extended for another 2 years. During the 2 years the number of nextbike station and bikes will be increased.
The nextbike pilot was set up to see how the bikes and stations would be adapted in the city and how the bike sharing system can contribute to the regional public transport.
The use of the shared bikes in Dordrecht is still limited, but shows an upward trend. The municipality of Dordrecht, the province of South-Holland and the transport operators see sufficient growth opportunities to extend the trial. In the extension period of the trial, Qbuzz will focus on stimulating business use, commuter traffic and further growth of the current tourist/recreational traffic. The first start has been made by opening a virtual nextbike station at the municipality office so that an attractive alternative is created for trips between the office, P+R stations and Dordrecht CS.
In addition, Ideal payments will be made possible; this will remove an important payment threshold. And by adding electric bikes and more stations in Spring 2019 it is expected that the attractiveness of the system will increase further.
The current nextbike stations in Dordrecht are Dordrecht Centraal Station, P+R Energiehuis, P+R Weeskinderdijk, De Merwedekade (Waterbus) en Grevelingenweg/Baanhoek. The number of stations will be expanded in the region in the upcoming months.
The pilot is made possible with the support of the Province of South Holland and the Dordrecht municipality.